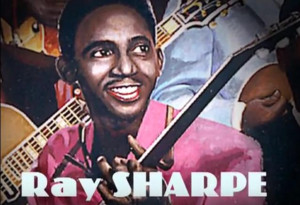 Edward Ray Sharpe (born February 8, 1938) is an American R&B and rockabilly singer, guitarist, and songwriter. Many of his recordings, including his best-known, "Linda Lu", are sometimes classed as rockabilly – he was described by one record producer as "the greatest white-sounding black dude ever"

His recording career started in Phoenix, Arizona in April 1958, when Lee Hazlewood produced his single, "That's the Way I Feel" / "Oh, My Baby's Gone".

His second record, "Linda Lu"[3] / "Monkey's Uncle" – both sides written by Sharpe, produced by Hazlewood, and featuring Al Casey on guitar – was much more successful. Recorded in May 1959, it reached No. 46 on the Billboard Hot 100 that year. Following its success, "Linda Lu" has subsequently been covered by many artists, including the Rolling Stones, The Kingsmen, Johnny Kidd and the Pirates, Flying Burrito Brothers, and Tom Jones.

Subsequent single releases on a variety of record labels, including Hazlewood's own Trey label, were less successful. These included recordings made in 1966 with King Curtis, which featured Jimi Hendrix on guitar.